Old Durkheim was used to taking blows, right from the day of his PhD defense in 1893. His dissertation, later published as The Division of Labour in Society, was turned down twice. The third time he got it through, but not without serious objections.

Durkheim was criticized for treating “the evolution of morality as inexorably determined by social causes”(Giddens 1978, 34) – and consequently for replacing God with a deified ‘society.’ Since then critique of Durkheim’s work never ceased. He threw himself into the fray, engaging in public intellectual battles with many of his adversaries. But, how did he fare posthumously in the lion’s den of the SRC’s Resilience Research School?

Durkheim is deemed responsible by some for leading sociology down the wrong theoretical track, especially with his emphasis on ‘social facts’. Bruno Latour, for example, argues that there are no discrete social totalities such as ‘social facts’, let alone ‘collective consciousness’. Instead, citing Margaret Thatcher’s famous line that there is “no such thing as society,” Latour proposes multiple, overlapping, contradicting networks of people and things as a more fitting object for social science (Latour 2005). According to Latour social science would be in a better condition today if it had listened more closely to the individualist sociology of Durkheim’s nemesis Gabriel Tarde. 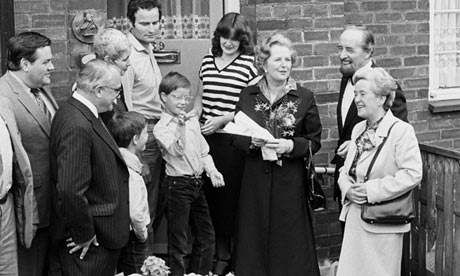 from the Guardian: Margaret Thatcher with the Greater London Council’s 12,000th council home buyer in 1980. She was initially opposed to the right to buy. Photograph: PA Archive

Durkheim is also taken to task for denying the influence of natural environments on the development of societies. He is held responsible for establishing the so-called ‘human exceptionalism paradigm’ (Catton and Dunlap 1978; Dunlap and Catton 1979) that dominated the development of the social sciences during most of the 20th century. In this interpretation Durkheim was so preoccupied with establishing sociology as an independent scientific discipline, he purified it from all biological, psychological, and ecological explanations. ‘Social facts can only be explained with other social facts’ as his famous dictum has it.

But how averse really was Durkheim from non-sociological explanations? Well, against the famous 19th century sociologist and Social Darwinist Herbert Spencer, Durkheim did assert that natural environments did not determine societies. But he did not think that society was autonomous from nature:

[…] even if society is a specific reality it is not an empire within an empire; it is part of nature, and indeed its highest representation. The social realm is a natural realm which differs from the others only by greater complexity” (Durkheim 1912 [1976]: 18).

In his dissertation he poses that “Man depends upon only three kinds of environment: the organism, the external world, and society” (1964 [1893]: 285). Moreover, he points out that the natural environment “bears the imprint of society” (1899 [1972]: 88 cited in Gross 2000, 283), i.e. describing how societies as complex social realities can partly disengage themselves from nature and, in so doing, transform nature:

A society is the most powerful combination of physical and moral forces of which nature offers us an example. Nowhere else is an equal richness of different materials, carried to such a degree of concentration, to be found. Then it is not surprising that a higher life disengaged itself which, by reacting upon the elements of which it is the product, raises them to a higher plane of existence and transforms them” (idem, p. 446)

Remarks that sound surprisingly up-to-date in light of contemporary attempts to capture the co-production of nature and society: ‘novel ecosystems’ (Hobbs et al. 2013); ‘new natures’ (Jorgensen et al 2013); ‘environing’ (Sörlin and Warde 2009); ‘niche-construction’ (Odling-Smee et al. 2003). But to brand Durkheim as an early ecological sociologist would be going too far. As argued last week, that honor is better bestowed on Marx.

Discussions in class focused most on what Durkheim meant with his elusive and thought-provoking concept of ‘social fact’. From the second preface to The Rules of Sociological Method it becomes clear that this term was considered controversial immediately after its introduction in 1895. Here Durkheim goes to considerable lengths to defend it, pointing out misinterpretations and offering clarifications.

Critics had problems accepting that a social fact, according to Durkheim, exerts an “external constraint” over individuals. Was he not reifying social facts as something above and beyond individuals? In the preface Durkheim points out that social facts are real because they make themselves “felt” and “reckoned with”, and they “are never completely overcome” (1895 [1982], 44). “The individual encounters them when they are already completely fashioned and he cannot cause them to cease to exist or be different from what they are” (idem, 45).

In the remaining argument Durkheim also explains how the “individual plays a part in their creation [of social facts]”, and that we do not “receive them passively and without causing them to undergo modification”, but that “different people adapt themselves differently to social facts” (idem, 47). At the end of the text Durkheim makes a useful and interesting comparison. He points out (with reference to his nephew Marcel Mauss) that social facts “moderately well” resemble institutions (idem, 45).

The concept of ‘institutions’ is well established in sustainability science through the work of Elinor Ostrom. She defines institutions as “the prescriptions that humans use to organize all forms of repetitive and structured interactions” (Ostrom 2005, 2). Now compare her definition against Durkheim’s definition of institutions as “collective ways of acting and thinking” (1895 [1982], 45).

In Ostrom’s definition institutions seem to imply that institutions are tools that people use with the intention to organize social life. Durkheim casts his net much wider, and includes besides intentional, deliberate social action also more tacit, unconscious socially shared habits of thought and action. Would perhaps Durkheim’s understanding, compared to Ostrom’s focus on intentional action, lend itself better to account for the unplanned and unanticipated effects of people’s social actions? A lot more can be said about the definitions of institutions. But not right now (instead see Hodgeson 2006), because Max Weber is waiting.

Gross, M. 2000. Classical sociology and the restoration of nature: The relevance of Émile Durkheim and Georg Simmel. Organization and Environment 13 (3): 277-291.

Latour, B. 2005. Reassembling the Social: An Introduction to Actor-Network-Theory. Oxford: Oxford University Press.