On MacroEconomic Resilience ex-banker Ashwin Parameswaran draws upon Holling’s pathology of natural resource management and the work of Hyman Minsky (a connection I’ve mentioned previously and Ashwin has explored extensively – see here and here) to write about The Resilience Stability Tradeoff: Drawing Analogies between River Flood Management and Macroeconomic Management.

In complex adaptive systems, stability does not equate to resilience. In fact, stability tends to breed loss of resilience and fragility or as Minsky put it, “stability is destabilising”. Although Minsky’s work has been somewhat neglected in economics, the principle of the resilience-stability tradeoff is common knowledge in ecology, especially since Buzz Holling’s pioneering work on the subject. If stability leads to fragility, then it follows that stabilisation too leads to increased system fragility. As Holling and Meffe put it in another landmark paper on the subject titled ‘Command and Control and the Pathology of Natural Resource Management’, “when the range of natural variation in a system is reduced, the system loses resilience.” Often, the goal of increased stability is synonymous with a goal of increased efficiency but “the goal of producing a maximum sustained yield may result in a more stable system of reduced resilience”.

The entire long arc of post-WW2 macroeconomic policy in the developed world can be described as a flawed exercise in macroeconomic stabilisation. But there is no better example of this principle than the Euro currency project as the below graph (from Pictet via FT Alphaville) illustrates. 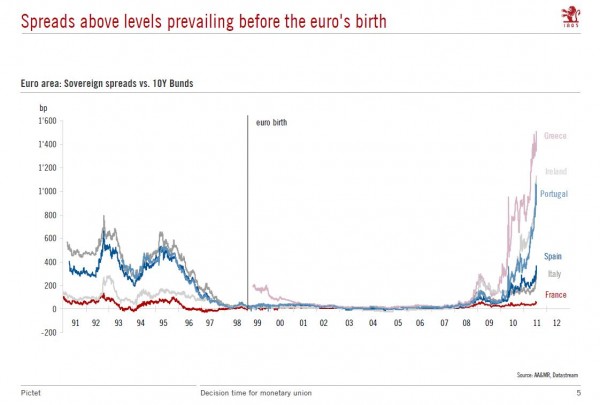 Instead of a moderately volatile mix of different currencies and interest rates, we now have a mostly stable currency union prone to the occasional risk of systemic collapse. If this was all there is to it, then it is not clear that the Euro is such a bad idea. After all, simply shifting the volatility out to the tails is not by itself a bad outcome. But the resilience-stability tradeoff is more than just a simple transformation in distribution. Economic agents adapt to a prolonged period of stability in such a manner that the system cannot “withstand even modest adverse shocks”. “Normal” disturbances that were easily absorbed prior to the period of stabilisation are now sufficient to cause a catastrophic transition. Izabella Kaminska laments the fact that sovereign spreads for many Eurozone countries (vs 10Y Bunds) now exceed pre-Euro levels. But the real problem isn’t so much that spreads have blown out but that they have blown out after a prolonged period of stability.

2 thoughts on “Resilience and Euro – diversity”