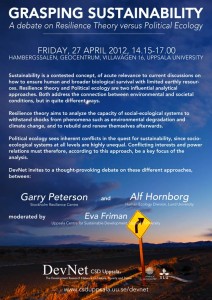 Will Steffen and I gave contrasting talks in a Mock Court on the meaning of the Anthropocene at the 3rd Nobel Laureate Symposium on Global Sustainability in Stockholm.  The talks are now online, along with other talks from the symposium (I recommend Frances Westley‘s on innovation).

Will and I were arguing about four charges (defined by the Symposium organizers):

I accepted Will’s case on the first, but argued against 2&3 and for 4.  The jury of Nobel Laureate ruled.

My colleagues are I recently published a paper in BioScience, Untangling the Environmentalist’s Paradox: Why Is Human Well-being Increasing As Ecosystem Services Degrade?

The paper originated from the involvement of the first four authors, my former PhD student Ciara Raudsepp-Hearne, my colleague at McGill Elena Bennett, and my former post-doc Maria Tengö and I, in the Millennium Ecosystem Assessment.  While we were all happy with our work on the MA, we felt that the MA had not had enough time to digest its findings.  I was particularly interested in the apparent contradiction between the MA’s assumption that ecosystem services are essential to human wellbeing and the observation that human wellbeing has been increasing as ecosystem services decline.

Our paper compares four alternative explanations of this apparent contradiction.  Our abstract outlines the paper:

Environmentalists have argued that ecological degradation will lead to declines in the well-being of people dependent on ecosystem services. The Millennium Ecosystem Assessment paradoxically found that human well-being has increased despite large global declines in most ecosystem services. We assess four explanations of these divergent trends: (1) We have measured well-being incorrectly; (2) well-being is dependent on food services, which are increasing, and not on other services that are declining; (3) technology has decoupled well-being from nature; (4) time lags may lead to future declines in well-being. Our ﬁndings discount the ﬁrst hypothesis, but elements of the remaining three appear plausible. Although ecologists have convincingly documented ecological decline, science does not adequately understand the implications of this decline for human well-being. Untangling how human well-being has increased as ecosystem conditions decline is critical to guiding future management of ecosystem services; we propose four research areas to help achieve this goal.

BioScience has highlighted the article by writing a press release, providing a set of teaching resources, and featuring the article in the issue’s editorial.  BioScience’s editor-in-chief Timothy M. Beardsley writes:

The recent oil calamity in the Gulf of Mexico, the biological impacts of which will take years to fully manifest and will persist for decades, should be reminder enough that although technology can insulate us from degrading ecosystem services locally, it often does so by creating problems elsewhere. As the human population grows, fewer places remain where the impacts can be absorbed without adversely affecting somebody. Aggregate global human well-being is, apparently, growing—though it is obviously declining in some places. Extending and defending the gains, particularly as the quest for energy becomes more intense, will require policymakers to understand the complicated relationship between ecosystem services and the humans who use them.

I’ll summarize our paper and respond to some of the media coverage of our paper in followup posts.

Thanks to BioScience an open access version is temporarily available here. END_OF_DOCUMENT_TOKEN_TO_BE_REPLACED

Line Gordon tells me that our recent paper with Elena Bennett was the second most downloaded article from Ecology Letters in December: Japan will reduce C emissions to 0 within 30 years twitter.com/ap/status/1320…

"Arctic warming by only a few degrees may suffice to abruptly activate large-scale permafrost thawing, indicating a… twitter.com/i/web/status/1…