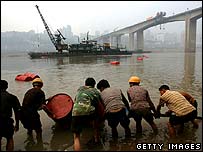 The Yangtze, China’s longest river, is “cancerous” with pollution, reports in the country’s state media have said.Environmental experts fear pollution from untreated agricultural and industrial waste could turn the Yangtze into a “dead river” within five years.

That would make it unable to sustain marine life or provide drinking water to the booming cities along its banks.

The Yangtze rises in China’s western mountains and passes through some of its most densely populated areas.

The government has promised to clean up the Yangtze, which supplies water to almost 200 cities along its banks.

But experts speaking in China’s state media say that unless action is taken quickly, billions of tonnes of untreated industrial and agricultural waste and sewage are likely to kill what remains of the river’s plant and wildlife species within five years.

China’s rapid economic development means that many of the nation’s waterways are facing similar problems.

Last year the authorities announced that the country’s second-longest river, the Yellow River, was so polluted that it was not safe for drinking.

Correspondents say that 300 million people in China do not have access to safe drinking water.

They say that government efforts to clean up the country’s polluted lakes and waterways are being thwarted by lax enforcement standards.

Jonathan Overpeck and others have a paper Paleoclimatic Evidence for Future Ice-Sheet Instability and Rapid Sea-Level Rise in Science (24 March 2006) that suggests that sea level rise due to anthropogenic climate change could occur much faster than people have previously expected. Possibly an increase of 5 to 10 m of several centuries. (For news articles see BBC, NYTimes, & Toronto G&M).

To visualize the consquences of sea level rise:

WorldChanging points to Flood Maps. A site that mashes up NASA elevation data with Google Maps, and offers a visualization of the effects of a single meter increase all the way to a 14 meter rise. Some examples are: Vancouver with 6m sea rise, New Orleans, and the Netherlands.

Also, Jonathan Overpeck‘s lab also has a visualization of the consquences of sea level rise for the US and the world.

The ice sheet problem today very much resembles the ozone problem of the early 1980s, before researchers recognized the Antarctic ozone hole, Oppenheimer and Alley have written. The stakes are high in both cases, and the uncertainties are large. Chemists had shown that chlorine gas would, in theory, destroy ozone, but no ozone destruction had yet been seen in the atmosphere. While the magnitude of the problem remained uncertain, only a few countries restricted the use of chlorofluorocarbons, mainly by banning their use in aerosol sprays.

But then the ozone hole showed up, and scientists soon realized a second, far more powerful loss mechanism was operating in the stratosphere; the solid surfaces of ice cloud particles were accelerating the destruction of ozone by chlorine. Far more drastic measures than banning aerosols would be required to handle the problem.

Now glaciologists have a second mechanism for the loss of ice: accelerated flow of the ice itself, not just its meltwater, to the sea. “In the end, ice dynamics is going to win out” over simple, slower melting, says Bindschadler. Is glacier acceleration the ozone hole of sea level rise? No one knows. No one knows whether the exceptionally strong warmings around the ice will continue apace, whether the ice accelerations of recent years will slow as the ice sheets adjust to the new warmth, or whether more glaciers will fall prey to the warmth. No one knows, yet.

Global International Waters Assessment is a systematic assessment of the environmental conditions and problems in large transboundary waters, comprising marine, coastal and freshwater areas, and surface waters as well as ground waters. Involving over 1,500 expert it has assessed 66 of the world’s major river basins and recently published a synthesis report. These publications are freely available online. The synthesis report‘s section on pollution provides a map of eutrophication impact.

… have become increasingly common in the world’s lakes, estuaries and coastal zones, with serious impacts on local fisheries, biodiversity and ecosystem functions. Extensive dead zones have been observed for many years in the Baltic Sea, Black Sea and Gulf of Mexico. The GIWA assessment has compiled information on dead zones in the Southern Hemisphere, including several lagoons in the Brazil Current region, coastal locations in the Humboldt Current region, and in the Yangtze River estuary located in the East China Sea region.

Compare the map of soil moisture – atmosphere couplings against Gordon et al’s 2005 map of changes in vapour flows in the Human modification of global water vapor flows from the land surface.

Note that the location of increases in vapor flows in irrigation matches up with several of the hotspots identified in the map of soil moisture – atmosphere couplings – central Great Plains of North America, and India. Change occurs also in less intense hot spots appear in South America and China. Consquently, the combination of these two papers predicts that irrigation should have altered the local climate in these regions more than in other regions.

Current industrial agricultural practices, particularly the overuse of fertilizer and its sloppy management, frequently create a tradeoff between agricultural production and coastal eutrophication. That is increases in agricultural yields have produced low oxygen zones around the world. The UNEP Global Environmental Outlook 2003 maps the location of coastal anoxic zones world wide (somewhat confusingly the worst cases – the persistent ones are coloured yellow, next worst red and orange, and least worst blue).

Global distribution of oxygen-depleted coastal zones. The 146 zones shown are associated with either majorpopulation concentrations or with watersheds that deliver large quantities of nutrients to coastal waters.

END_OF_DOCUMENT_TOKEN_TO_BE_REPLACED

Real Climate, a commentary website on climate science by working climate scientists for the interested public, has commented on James Lovelock‘s new book Revenge of Gaia: Why the earth is fighting back – and how we can still save humanity.
END_OF_DOCUMENT_TOKEN_TO_BE_REPLACED

END_OF_DOCUMENT_TOKEN_TO_BE_REPLACED

Any public campaign benefits from having an iconic image — something that captures the essence of the message and engraves it indelibly on our memories. But it is almost impossible to predict which images will actually stick, so creating one on demand is extraordinarily difficult. …

Even so, finding an iconic image was one of the goals of a meeting, Changing the Climate, held in Oxford, UK, on 11 and 12 September. Researchers and practitioners of the visual, literary, musical and performing arts came together to publicize the predicted perils of climate change, and there was much talk about a memorable image that would encapsulate the initiative…

The data must come from the best science available, but the presentation for maximum impact is a matter of invention in art and design. Of the images produced by the scientists, one in particular seemed to have the potential to combine iconicity with complexity. This is the ‘Tipping Points Map’ devised by Hans Joachim Schellnhuber, director of the Potsdam Institute for Climate Impact Research in Germany and research director of the Tyndall Centre for Climate Change Research at the University of East Anglia, UK. This global map, shown here, outlines what Schellnhuber has identified as regions where the balance of particular systems has reached the critical point at which potentially irreversible change is imminent, or actually occurring.
END_OF_DOCUMENT_TOKEN_TO_BE_REPLACED